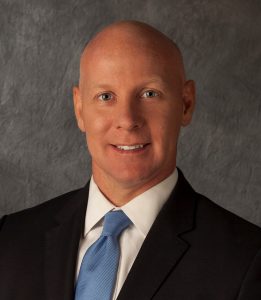 Don E. King serves as senior vice president, Ascension and president and CEO of Ascension Florida and Gulf Coast. In his role, he has the daily clinical, operational, strategic, and financial responsibility for Ascension’s Florida and Gulf Coast Ministry Market, which includes the Sacred Heart Health System and the Studer Family Children’s Hospital based in Pensacola and the Florida panhandle, the St. Vincent’s Health System based in Jacksonville, and Providence Hospital in Mobile, Alabama.

Prior to his current role, Mr. King served as senior vice president, Ascension, and Kansas Ministry Market Executive for Wichita-based Ascension Via Christi, from 2019 – 2022. In this role, he provided strategic and operational leadership while promoting alignment within Ascension Kansas and Ascension’s national ministry.

Mr. King earned both his undergraduate and master’s degrees from Loma Linda University in southern California.

Active in various community organizations, he has served as board member of the American Heart Association of Middle Tennessee, on the Executive Committee of the Leukemia and Lymphoma Society, and as board member for YMCA at Maryland Farms; in 2014, he received the Regent’s Award from American College of Healthcare Executives.

Mr. King and his wife, Wendy, have two children, Grant and Abigail.