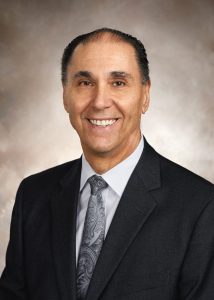 Prior to joining Lee Health in 2007, and for 24 years, Dr. Antonucci was a well-respected, practicing obstetrician and gynecologist (OB/GYN). During an era of corporate acquisitions, Dr. Antonucci was determined to keep his OB/GYN practice independent. He strategically expanded the practice by consolidating with another OB/GYN practice and eventually expanded into primary care services. In 1983, he co-founded Physicians Primary Care (PPC), a large multi-specialty physician practice in Lee County. Today, PPC continues as one of Lee County’s premier, independent, group medical practices.

In 2007, Dr. Antonucci joined Lee Health as Chief Administrative Officer for Cape Coral Hospital. In 2009, he was appointed Chief Operating Officer of Hospital Services for the health system and assumed responsibility for Physician Services in early 2010. In October 2011, Dr. Antonucci was named Chief Operating Officer for the health system. He was named President and Chief Executive Officer of Lee Health in June 2017.

During his tenure as Lee Health’s Chief Operating Officer, Dr. Antonucci took a leadership role in hardwiring a lean culture to engage employees, physicians and others in improving quality, safety, and patient experience. As a result, the health system experienced multiple years of successful operations with three consecutive years of record financials and continues to be positioned well for the future.

Dr. Antonucci has been a driving force in Lee Health’s patient safety program, which has won numerous awards. Under his leadership, the health system has made safety the No. 1 core value.

Dr. Antonucci is a strong believer in engaging and empowering front-line staff to improve an organization’s culture and quality. During stints as Chief Administrative Officer for Cape Coral Hospital and as Chief Operating Officer for Lee Health, he frequently embedded himself with front-line work teams, such as housekeeping and patient transport, as a way to stay connected to the care provided to patients each day and identify ways to improve quality and remove barriers.

Dr. Antonucci is guided by passion to deliver care that improves the quality of people’s lives and his commitment to the community, in which he has lived and served for more than 30 years.

Dr. Antonucci is responsible for the growth, vitality, operation and success of Lee Health. His responsibilities include the coordination of internal and external affairs of Lee Health by guiding the development of long and short-term objectives. Upon approval of the Lee Health Board of Directors, he executes strategies and plans designed to achieve these objectives. Dr. Antonucci represents Lee Health to key constituencies and engages in a wide variety of activities designed to improve the health of the population served in an effective and efficient manner.

Dr. Antonucci attended medical school at the University of Miami and completed his residency in obstetrics and gynecology at Eastern Virginia Graduate School of Medicine. He also earned a master’s degree in business administration from the University of South Florida.