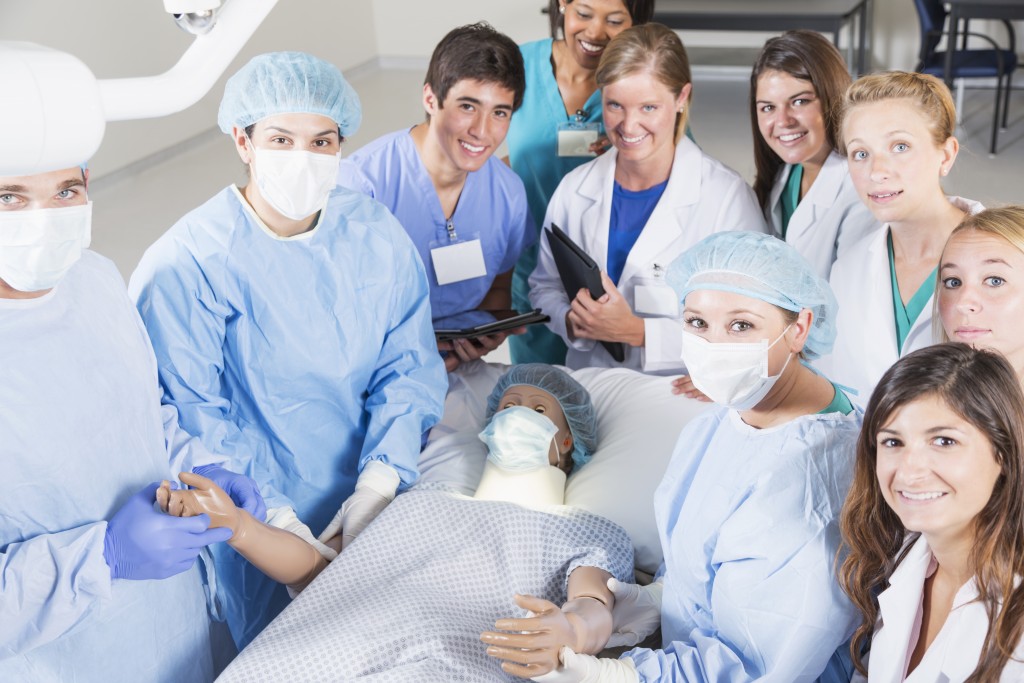 Group of medical students working on a dummy patient.

Florida is facing a health care crisis – one that could have dire consequences if not addressed quickly and decisively. The problem? Florida is not training enough doctors to meet its future needs. Florida is ranked 11th from the bottom in number of medical residents per 100,000 population. New York state, for example, has a similar population yet it is ranked second highest in the nation with 82.4 resident FTEs compared with Florida’s 22.6 resident FTEs per 100,000 people, according to AAMC data bank. The good news is that together with the Governor and the Florida Legislature, the members of the Safety Net Hospital Alliance of Florida are making progress in our efforts to address this crisis.

The federal government’s GME support is essential. Unfortunately, federal rules limit GME support in ways that have a direct impact on Florida’s GME infrastructure. For example, four Florida hospitals have programs that have more than 100 full-time equivalent (FTE) residents above the cap established by Medicare as allowable for federal support. Specifically, these four hospitals are training 528 of Florida’s future doctors with no support from the federal Medicare program. As a result of this federal policy, state support of GME in Florida is imperative.

In 2013, Governor Rick Scott formally recognized the state’s developing doctor shortage and, along with the Florida Legislature, created and funded the Statewide Medicaid Residency Program (MRP). The MRP was designed to help hospitals serving Medicaid patients offset the expense of operating physician residency programs. As part of the MRP, hospitals were required for the first time to report to Florida Medicaid their numbers of residency slots. This reporting allowed the first systematic glimpse into the numbers and locations of physician residents in Florida.

In its first year, the MRP provided for the funding of 3,896 resident FTEs. This year (SFY 2018-19), the program funded 5,509 resident FTEs, an increase of 1,613 funded FTEs over the first year – a laudable 41 percent growth rate. Of the increased FTEs, 1,313 were in 24 hospitals that had not previously reported physician residency programs. These new facilities raised the number of participating hospitals to 63.

In 2017, the Governor and Legislature recognized that the program had in its first four years become a victim of its own success as residency slots were growing faster than program funding. The GME resident per-FTE allocation dropped from an average of $20,528 in the program’s first year to $17,098 in year four, which prompted new funding to be added in the fifth year of the program. However, this $17.3 Million increase only temporarily enhanced the per-FTE funding allocation, as this year (SFY 2018-19) the per-FTE portion was once again the victim of the program’s tremendous success dropping to 6.6% below last year.

While the MRP has been successful in expanding GME in Florida, it is only part of the solution to the state’s physician crisis. Simply creating more residents helps, but does little to ensure all areas of the state will have enough of the right kind of doctors in the coming years. Nor does it guard against creating an oversupply of doctors. If creating enough doctors is the cornerstone of a quality health care system, creating too many is a less-than-responsible use of scarce public funds. The Safety Nets recognized that effective program planning required a detailed, scientific and ground-level understanding of all of Florida’s health care marketplaces.

It was clear early on that the data needed for such an effort was not available. While helpful, the MRP reporting did not provide data to support the systematic analysis of physician workforce supply and demand that the Safety Nets needed to strategically address the growing crisis. In 2014, the Safety Nets, along with the Teaching Hospital Council of Florida, enlisted internationally known life sciences consulting giant IHS Markit, formerly IHS Global, to construct detailed micro- and macrosimulation models of Florida’s health care manpower marketplace. Using these custom models, IHS Markit studied the effects of the state’s unique and rapidly changing demographics, population growth and in-migration and health care utilization patterns on the projected local, regional and statewide needs for doctors by market and specialty. IHS Markit researchers were then able to compare the identified physician demand structure to a geolocated simulation of Florida’s physician supply pipeline. IHS Markit’s resulting analysis, Florida Physician Workforce Analysis: Forecasting Supply and Demand, was released in January 2015, marking the first time a state had utilized cutting-edge market simulations to strategically address its projected physician manpower needs.

The IHS Markit analysis produced several disturbing conclusions regarding Florida’s health care future (by 2025): Florida will have 20 percent fewer physician specialists than needed (a shortage of about 7,000 physicians); these shortages will span 20 different medical specialties; and physician shortages will impact every region in the state. IHS Markit’s empirical conclusions also validated previous anecdotal studies linking the location of a physician’s residency to their ultimate practice location, further confirming that such shortages can only be ameliorated through increased in-state GME support.

Armed with the IHS Markit analysis, the 2015 Florida Legislature and policymakers appropriated $100 million in new funding to GME. This program allocates $100,000 in GME Startup Bonuses to each newly created residency position in a shortage specialty and directs any remaining funding to support GME retention of shortage specialties.

Recognizing that much work remains if we are going to train enough physicians to meet the health care needs of Floridians, the 2018 Legislature approved additional funding to address challenges brought to light in the Training Tomorrows Doctors 2017 GME Annual report. The Florida Legislature added new focus to its commitment to ensuring that Floridians have access to the types of physicians and care they need by authorizing additional local and federal budget spending to reverse trends in: declining GME residents in deficit physician specialties; severe primary care physician shortage in Southwest Florida; and high uncompensated charity care in high tertiary statutory teaching hospitals.

As part of our mission to ensure every Floridian’s access to quality health care, the Safety Nets are producing this Training Tomorrow’s Doctors: Graduate Medical Education in Florida 2018 Annual Report to provide a comprehensive overview of the state’s graduate medical education infrastructure. In the first year, this report focused on Florida’s growing physician supply crisis while marking the ongoing efforts to tackle the problem. Perhaps most important, we were providing metrics that allowed us to track the progress of those efforts. It is these metrics that have offered a first-ever glimpse at trends in the numbers, location and type of GME residents; metrics that have enhanced policymakers ability to create evidence-based GME appropriations policy.